a production for the dance company Theater Hagen

← Über die Wut through and over →

Does hope help us to shape a different future, or does it block us and leave us hanging in an inactive waiting loop? Hope, as an emotion directed toward the future, is something we know as individuals as well as a society. It can be a motor for change, a kind of tool for developing utopias; without hope, no change, no demands on the future, no thinking about what is possible. But hope can also be a state of passivity, a waiting, a stagnation and abdication of responsibility.

Anna Konjetzky’s new work “hope/less” moves between these two pools. Prior, she and her team conducted a series of interviews as a basis for the production; about hope, about its absence, about new starts, personal expectations, about the future and fears.
After my last piece “Über die Wut” I would like to deal with another social condition and currently hope and also its reverse hopelessness seems to me to be a present element in our society which is in upheaval. But what can hope do, where does it exist, where not, and where should it be turned into hopelessness? Or can radical hope mean radical change? (Anna Konjetzky)

Four dancers move in “hope/less” in a space divided by a net made of safety belts. This enables a vertical and horizontal space of movement on and under the net; the dancers can hang on the net, lie on it, pull themselves up, but also fall through the net – a fragile, floating physical condition. The German word hoffen (hope) comes from the Middle Low German word ‘hopen’, which means ‘to hop’. Translated physically into our stage setting, it could mean a springing, a slight tremor of foreboding, a waiting see-saw, but also a flipping, a tipping, a losing of balance. (Anna Konjetzky)

“hope/less” uses four bodies in a stretchable and malleable space to think about the potential of hope/ hopelessness as a visionary, future-shaping force, understanding choreography as a dialogical and utopian practice. The production follows on from Anna Konjetzky’s solo ” Über die Wut” (2021), which was specifically dedicated to female anger as a constructive force, a tool for change. Both works explore emotion as an individual feeling and as a social condition with a view to change’s ability to initiate fundamental and radical change. 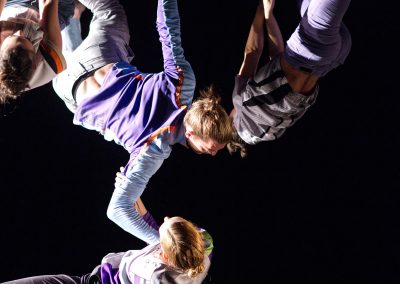 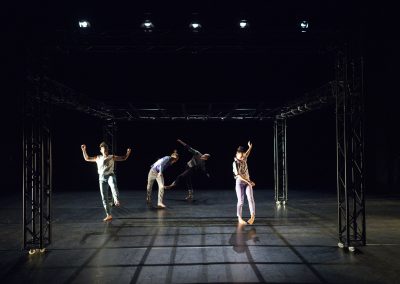 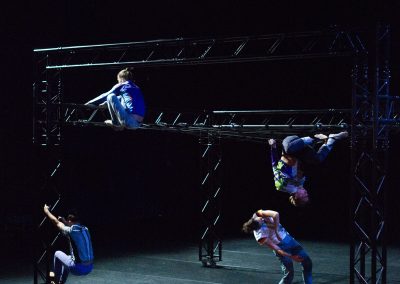 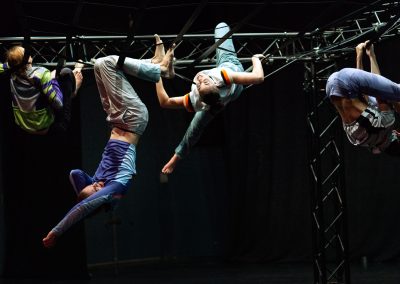 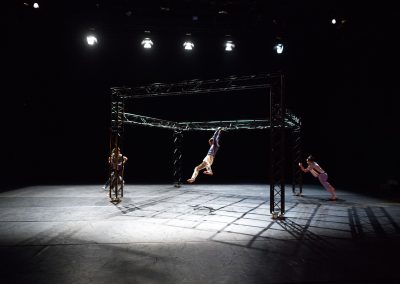 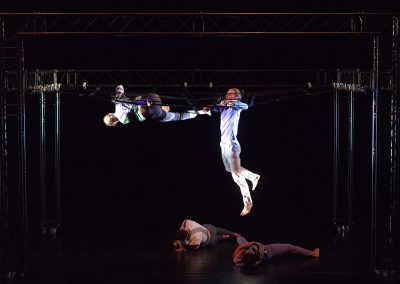 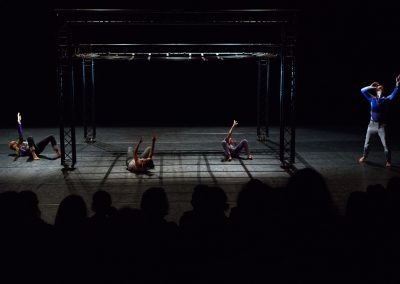 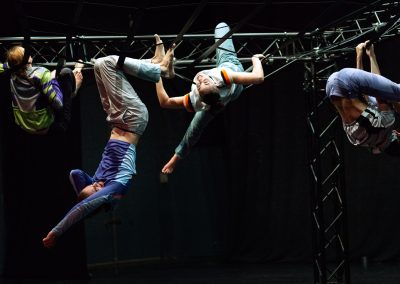 A dance piece by Anna Konjetzky

WUT (“ANGER”) is written in LED letters above the stage where the dancer Sahra Huby is acting important, flexing her muscles, opening her mouth wide, squeezing her eyebrows together, baring her teeth. Anger grips the body and enlarges the body; we spit blood, we foam at the mouth, anger takes our breath away and takes possession of our muscles, eyes, and voice, changes and distorts them, and lets our body appear grotesque, threatening, aggressive, but also humorous and comical – and so, on the wall behind Sahra Huby celebrities and politicians flicker and flutter, but also cartoons. In her new solo piece “On Anger” Anna Konjetzky investigates this emotion as an individual emotion and as a condition produced by social structures.
An entire arsenal of personal, political, and pop cultural gestures of anger are dissected and thoroughly examined. Huby slows down, fragmentizes, rhythmizes, elongates the movements, and in doing so she gives them an unexpected beauty and elegance, only to rage and erupt again in the next moment. Images of revolts, protests, and demonstrations appear, and the dancer adopts them and makes them her own. Anger is also a constructive energy, as an engine and impulse for social change. Iconic gestures – the raised fist of the Black Power Movement, wrists crossed over one another, the middle finger – proclaim the assault on unjust conditions, an attack on the powers that be, on existing hierarchies and structures.
“On Anger” examines the potentiality of anger – especially women’s anger – with movement, images, music, and texts. On this stage Sahra Huby is an angry woman, and she also brings onto the stage all those angry women from the present and the past as witnesses to be at her side – from Clytemnestra to Joan of Arc, and all the way to Rosa Parks and Audre Lorde. Together with them the work poses the question about a fundamental and radical transformation.
Anna Konjetzky has been creating dance pieces and dance installations since 2005; their contents and physicality are marked by a socio-political examination. This artist has received numerous awards for her works, which she presents all over the world, and she works and collaborates with a huge spectrum of artists, locations, and festivals.

A production by Anna Konjetzky & Co. in coproduction with the DANCE Festival Munich, the Münchner Kammerspiele and LOT Theatre Braunschweig. With the support of the cultural Department of the city of Munich and Fonds Darstellende Künste. Supported by fabric Potsdam. 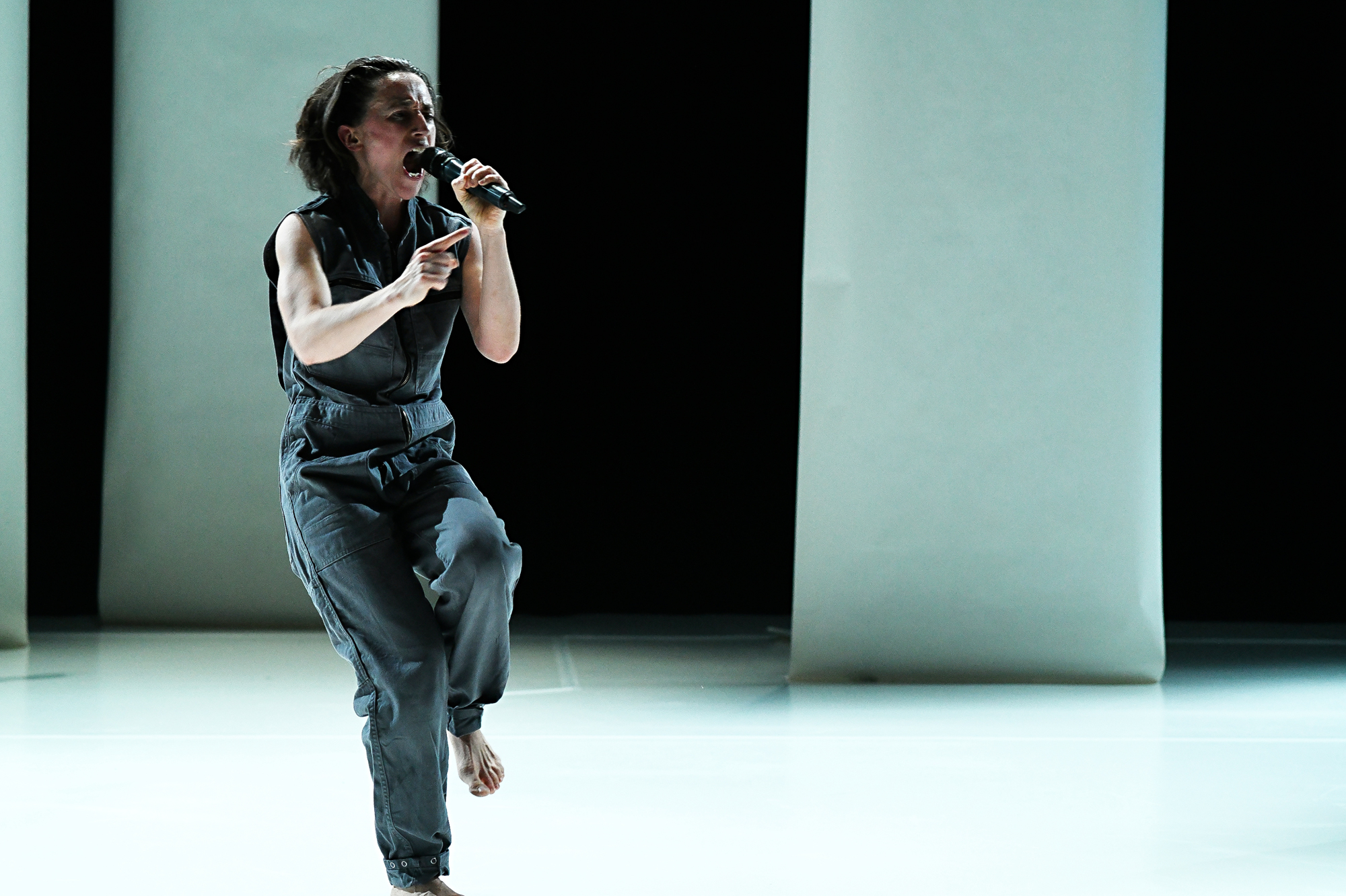 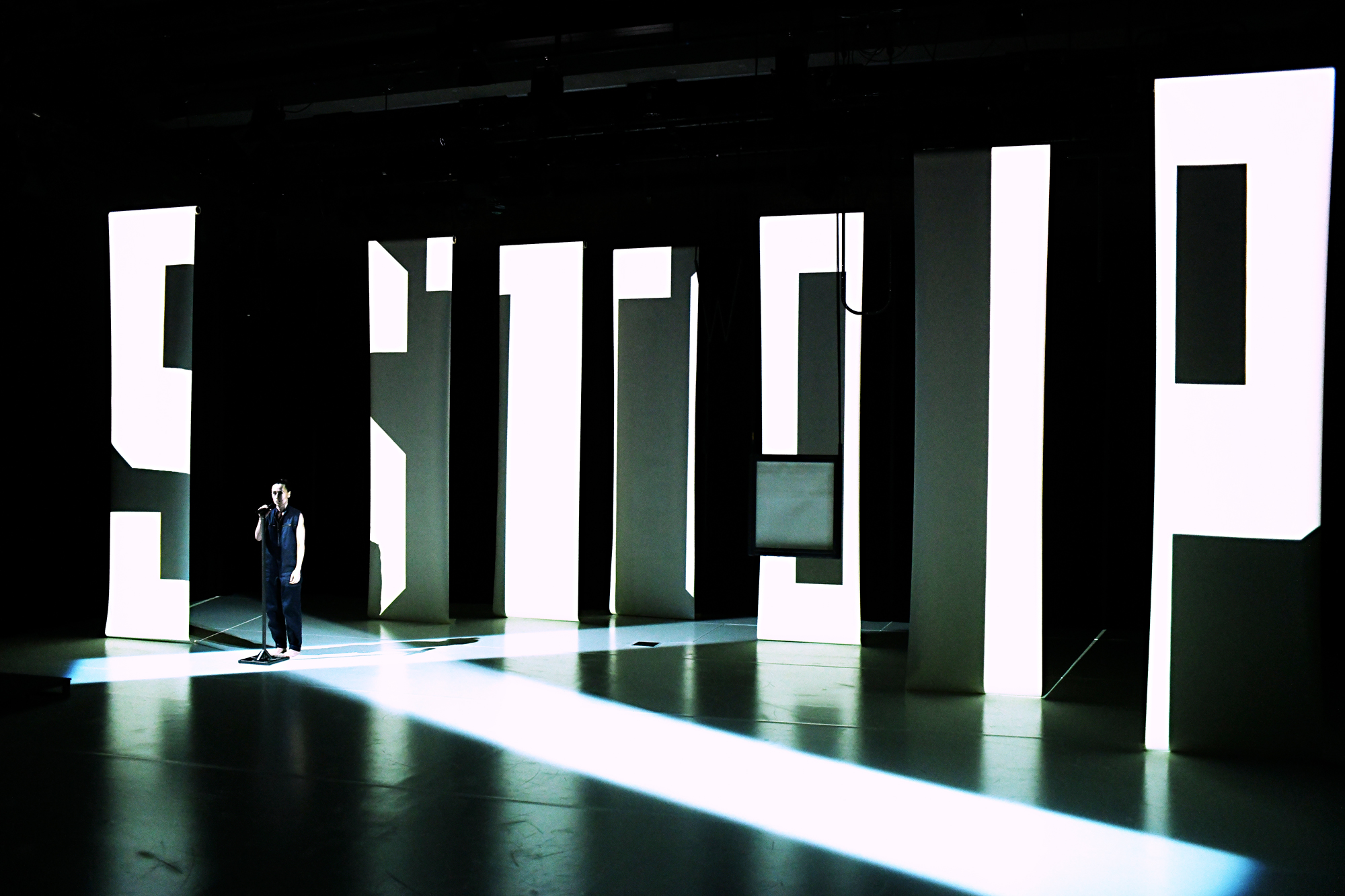 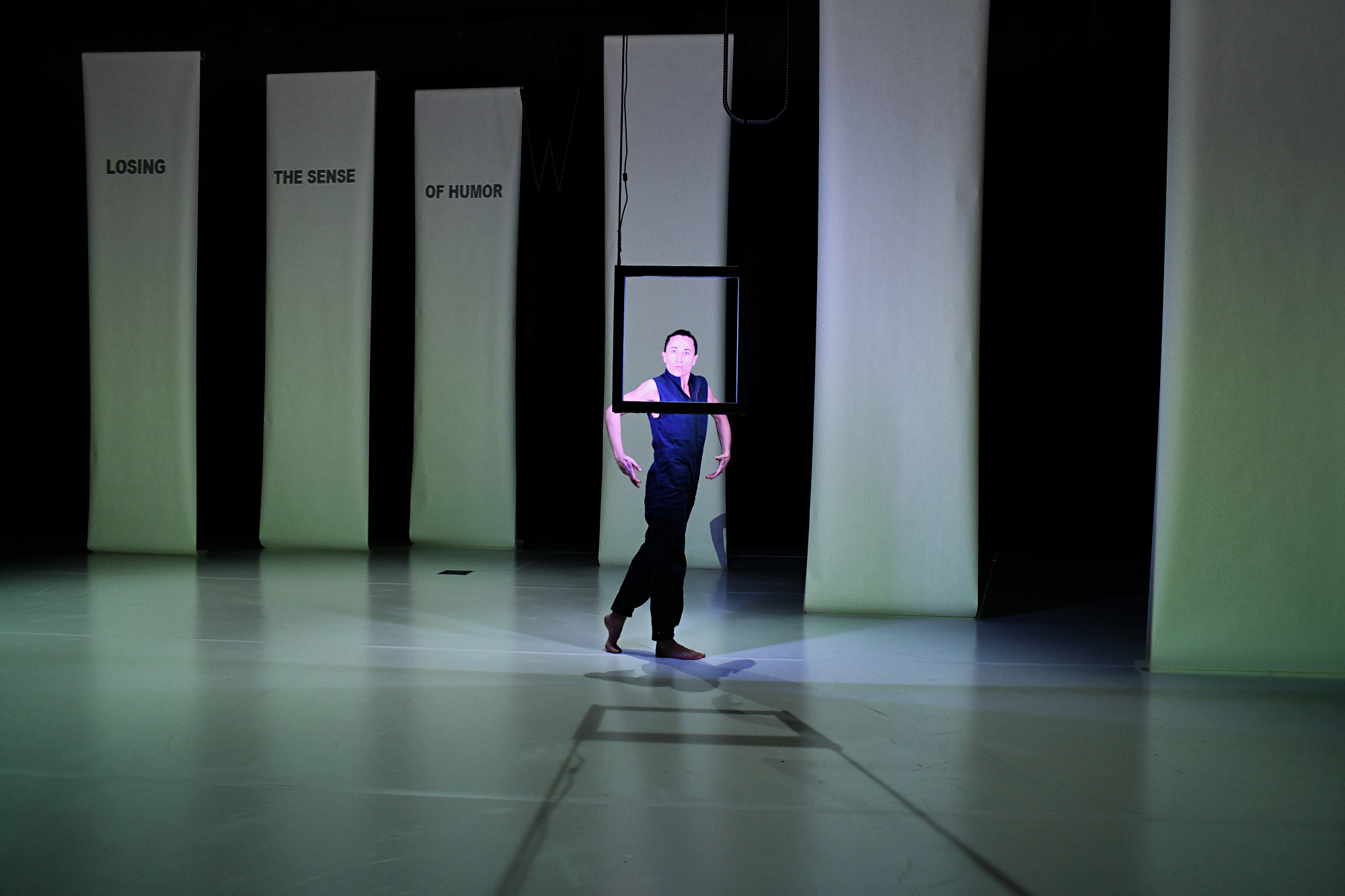 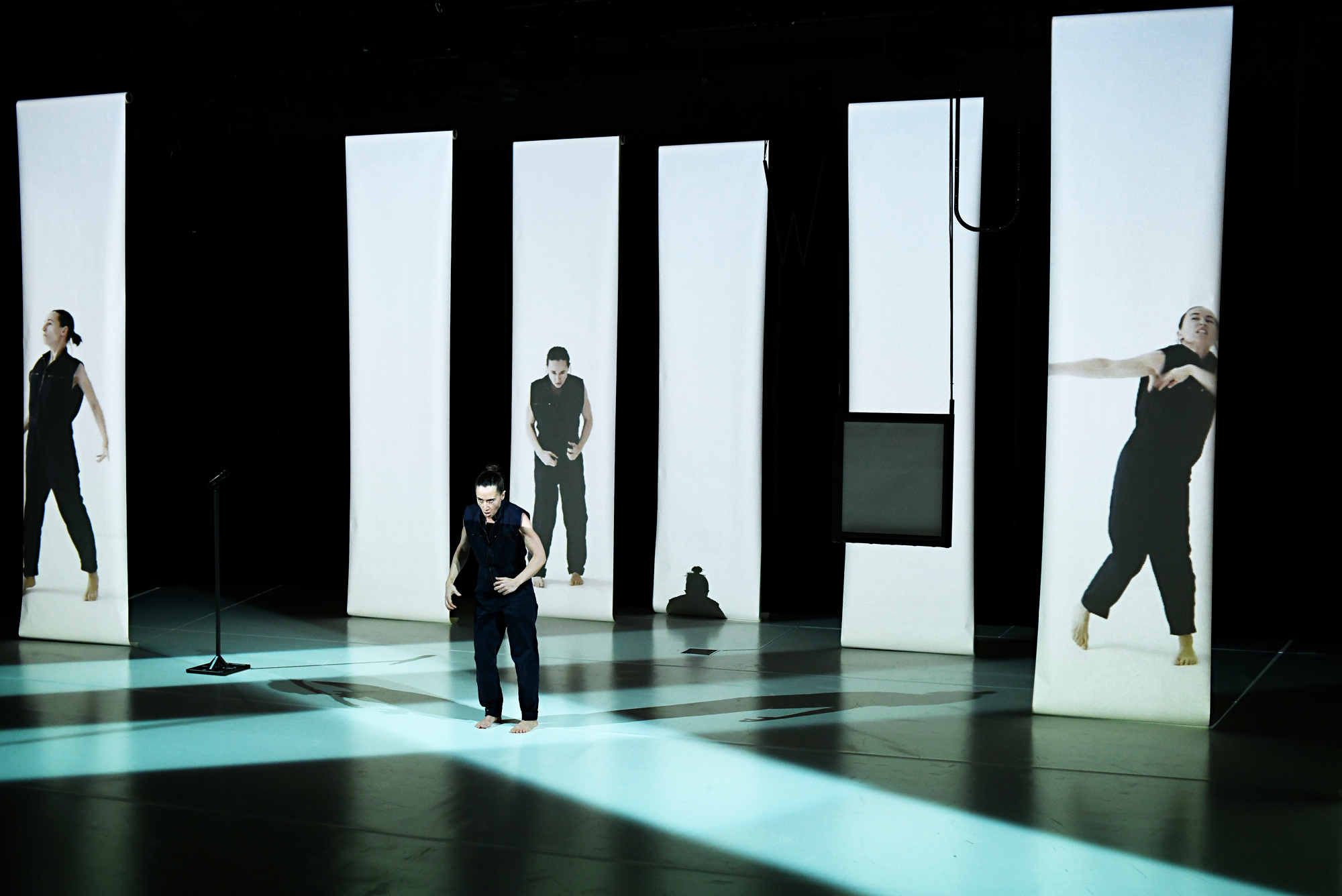 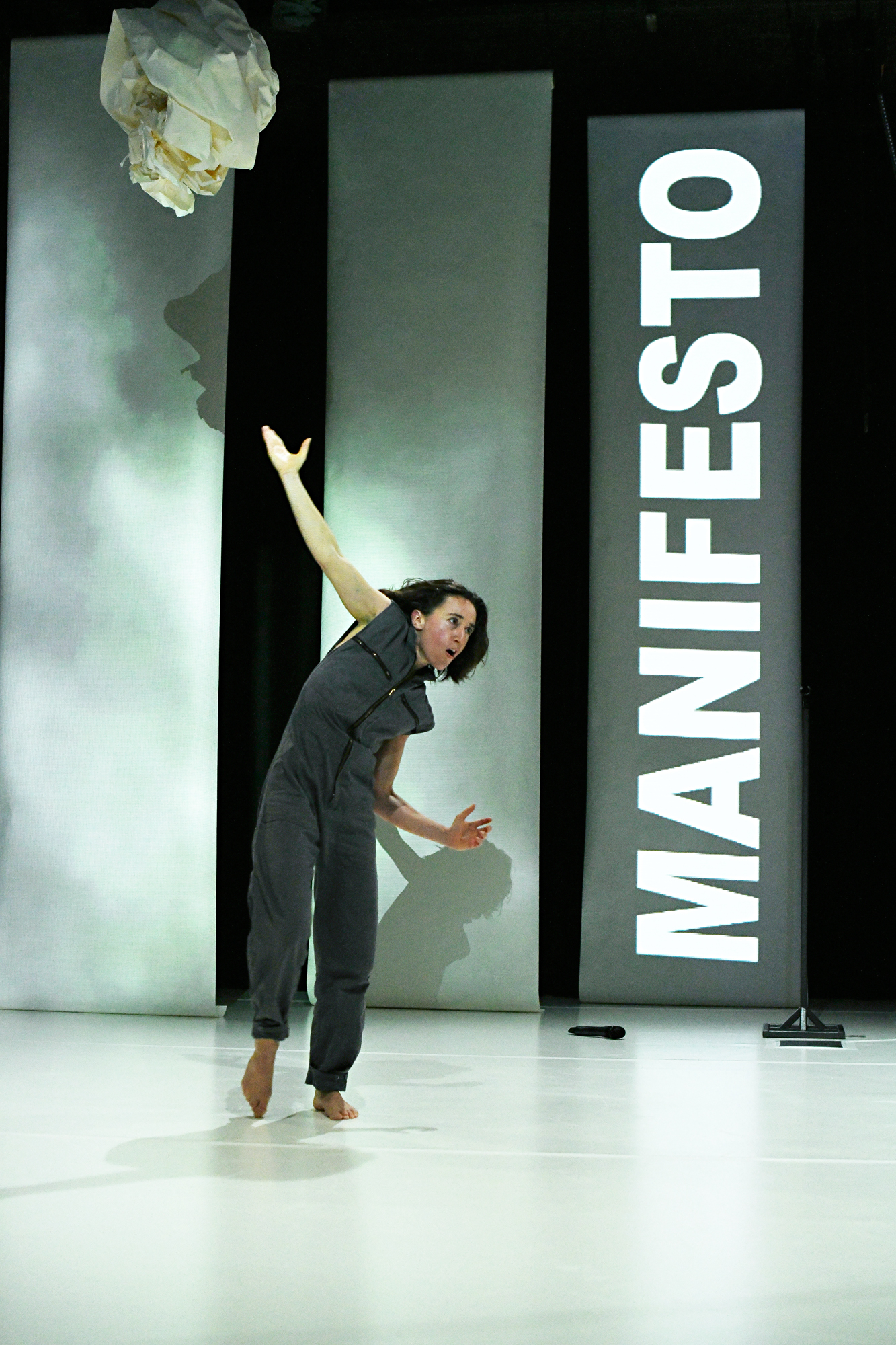 World Premiere 28.3.2020, Kammerspiele München
No premiere due to Covid 19

a Dance piece by Anna Konjetzky

The body is a political venue: the body symbolizes power, impotence, status and affiliation. With or via our bodies, we create our own social and cultural identities – just like we apply them to other people. Individuals are classified into groups, societies divided into segments. Homogenous spaces emerge that exclude the other while leaving individuals in the infinite cycle of peer groups and filter bubbles. DIVE is located in this field of tension between making difference visible and practicing community; it also develops identity as a permanent construction and deconstruction of overlapping and parallel events as well as self and foreign attribution. Individual protagonists’ perceptions and evaluations wander, shift and become a costume or a skin that cannot be cast off. Together with the seven dancers, Anna Konjetzky samples, mixes and scratches stereotypes and identities choreographically, musically and linguistically until a new collective beat emerges. DIVE celebrates heterogeneity and addresses questions of a commonality that is not based on similarity but rather exists despite – or precisely because of – differences.

This dance evening in English is created by a mixed crew of dancers from South Africa and Germany.

A production by Anna Konjetzky in co-production with Münchner Kammerspiele and Tafelhalle Nürnberg. With friendly support by the cultural Department of the City of Munich, Fonds Darstellende Künste and Kulturstiftung der Stadtsparkasse München. With backing from Tanztendenz München e.V., schwere reiter tanz und Muffathalle Betriebs GmbH. 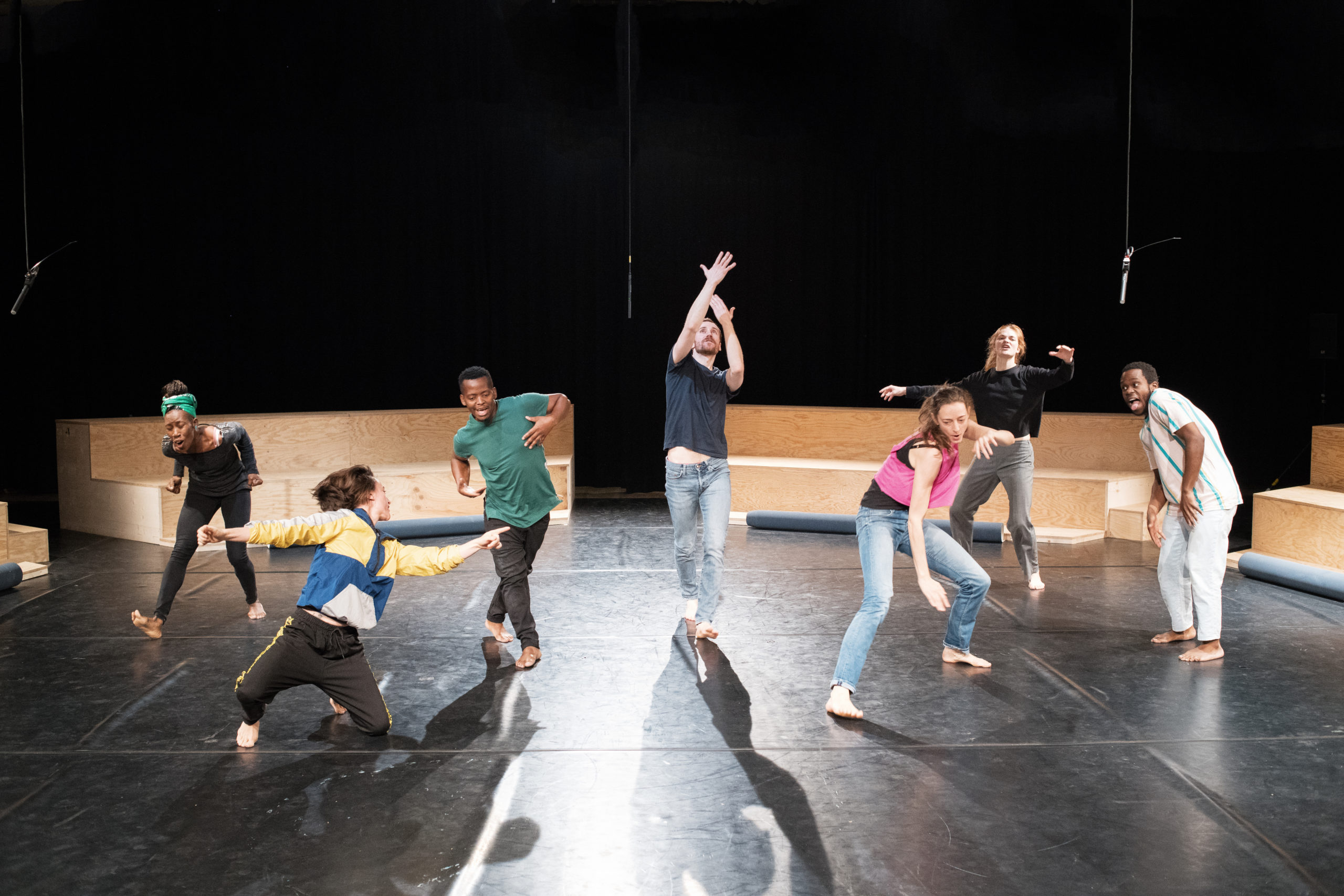 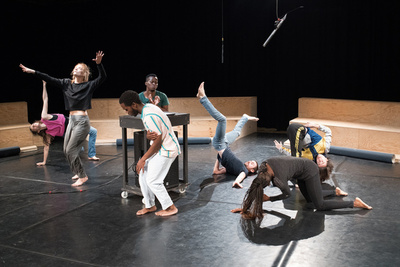 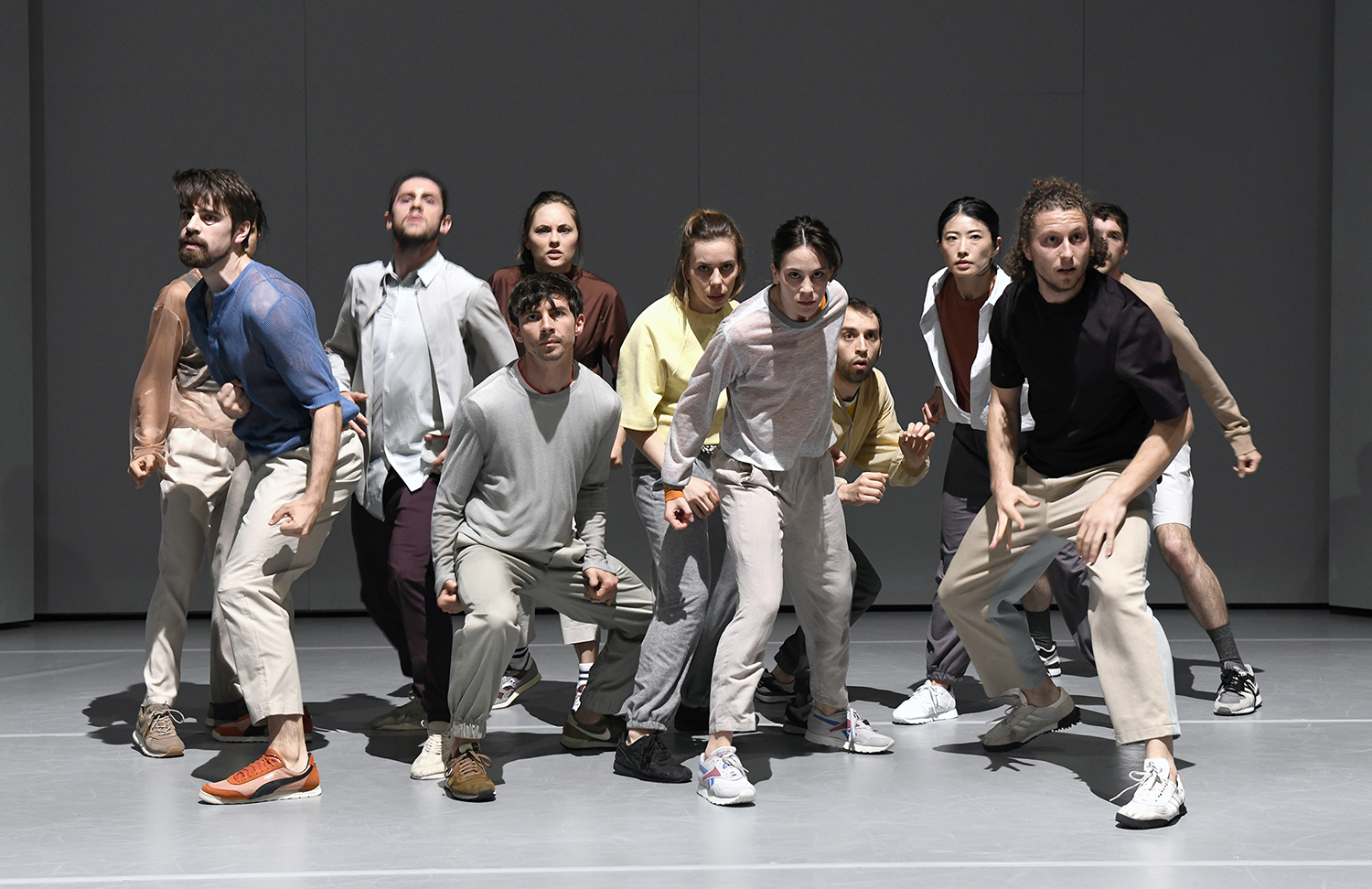 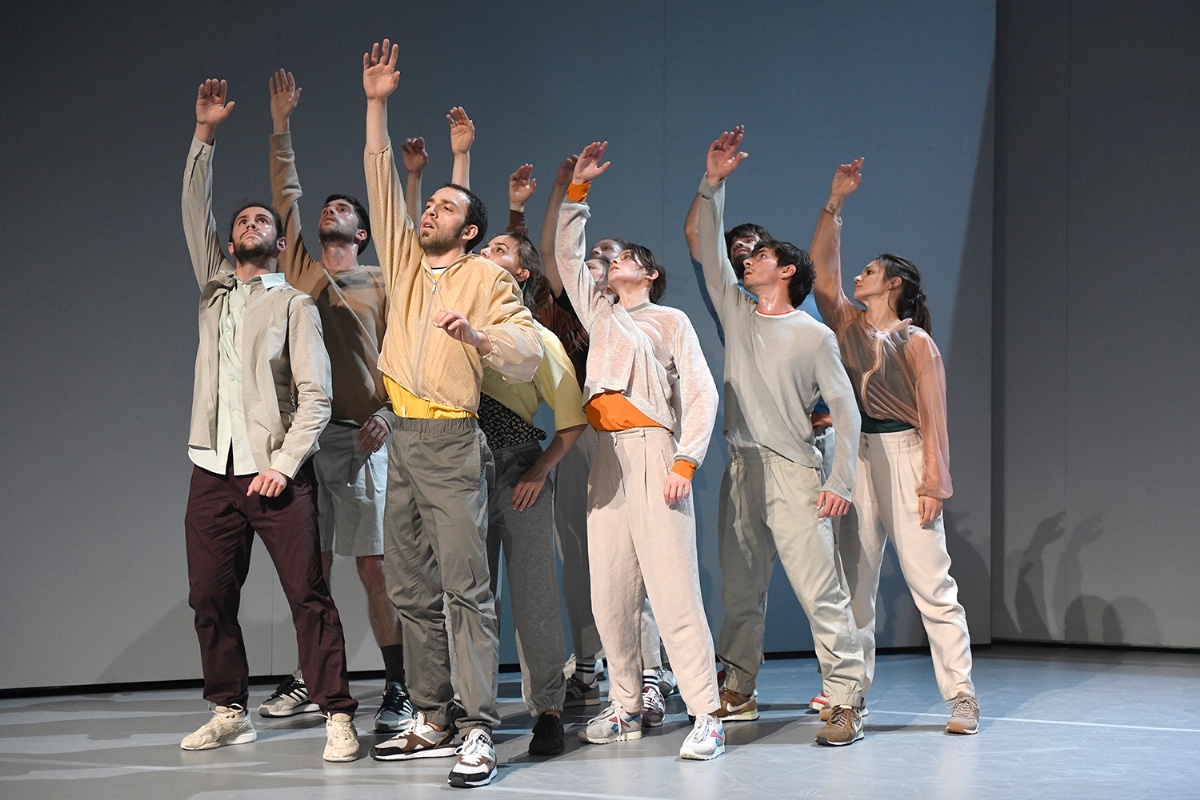 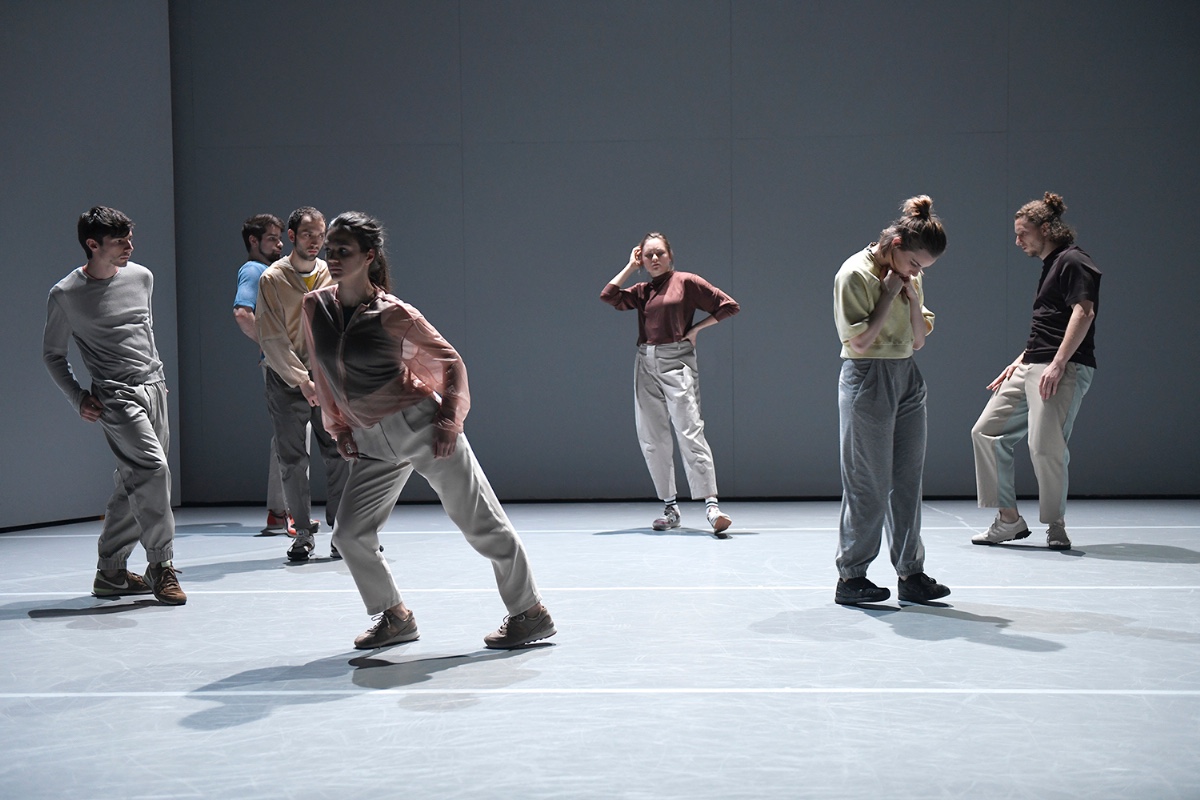 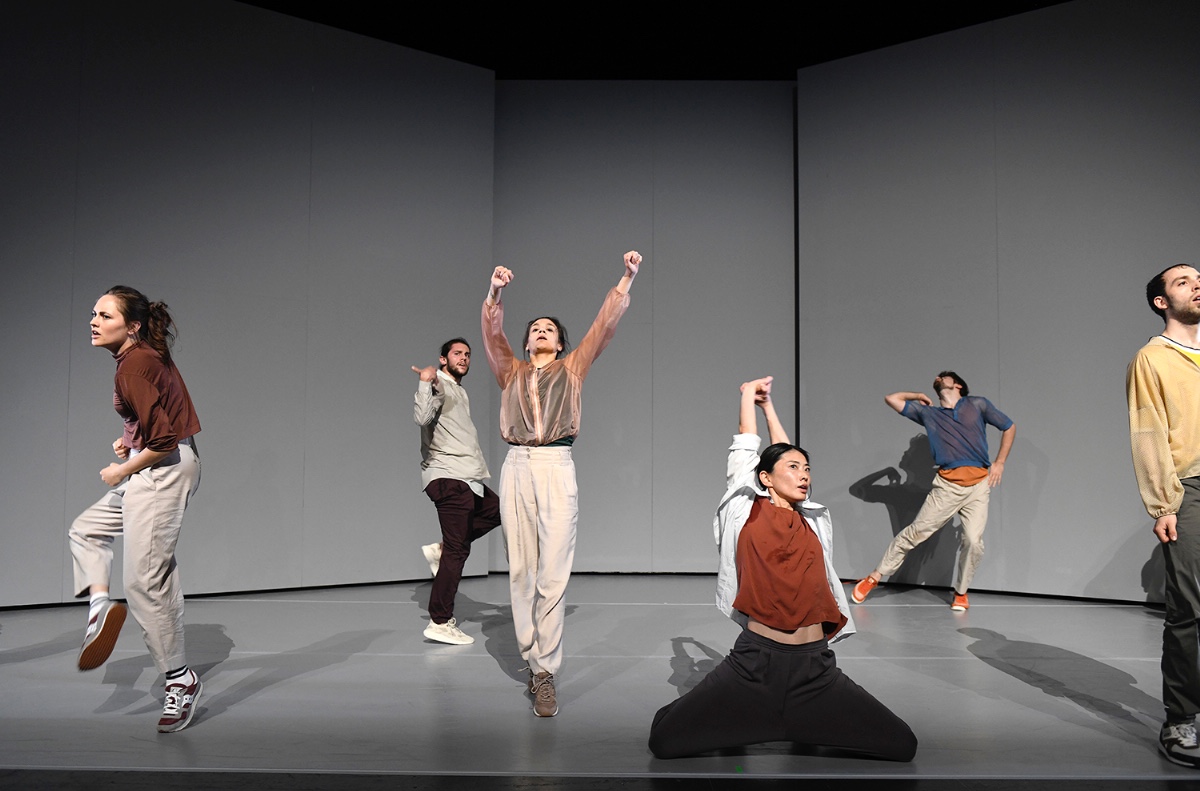 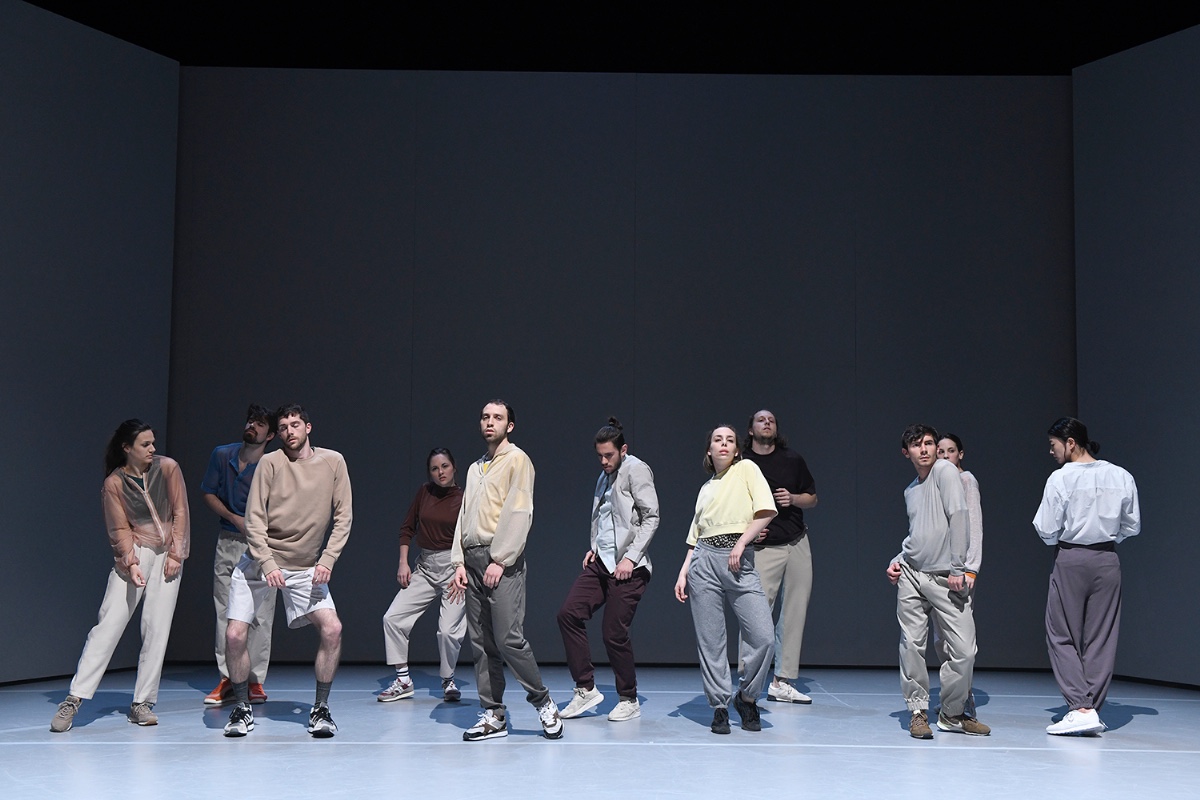 « Older Entries
We use cookies on our website to give you the most relevant experience by remembering your preferences and repeat visits. By clicking “Accept All”, you consent to the use of ALL the cookies. However, you may visit "Cookie Settings" to provide a controlled consent.
Cookie SettingsAccept All
Manage consent